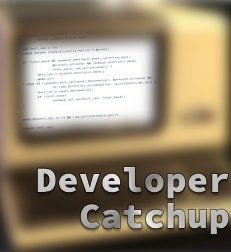 Let’s go fly a Kitematic: There’s plenty of command line tools for Docker and command line driven ways to run it on Mac OS X. The latter’s harder because you need to run a VM and load it with an image and… well there’s boot2docker to help but… Enter Kitematic which takes the previous tools and rolls them with a neat UI and some extra neat tricks to make it a lot easier to start playing with the idea. Among those tricks are things like automatically creating an [appname].dev DNS entry so you can quickly connect to your new apps when they are up and running. If you like to run GUI tools alongside terminal sessions on your Mac, you might want to give Kitematic a go.

Versioning wars: Yes, people are arguing on the Internet and this time its over versioning. Some years back, Semantic Versioning appeared and set out some rules for when to bump the major, minor and patch numbers in a version number to embue it with some meaning. While this works for libraries where the consumer is often another program, it works less well with code to be consumed by people. The argument starts on Underscore’s Github where breaking changes as fixes were causing friction over what the version should actually be. This spilled out onto Hacker News which lead to the suggestion that “Semantic Versioning Isn’t” and back to HN where people continued to disagree. But it did get Fear-Driver Versioning (ferver) and the idea of romantic versioning a moment in the sun. From what I see, SemVer works but it does require discipline and transparency from the developers and the consumers of that code. Still… Developers eh?… because those bike sheds won’t pick what colour they are going to be by themselves.

Old School on a Pi: Want to run old school stylee? We’re talking Unix V5 here. Matt Hoskins has updated his 2005 presentation on how to do this (think PDP emulation and similar) so you can now do it all on a Raspberry Pi. Read on to learn the true old ways of Unix.

Meteor updates packaging: Meteor’s a supercool Node.js framework for building apps and its steadily approaching version 1.0. Version 0.9.0 has just been released and along side various additions, there’s now a new Isobuild packaging system because in the Twenty-Tens, no framework or language is complete without it’s own packaging system. IsoBuild does not make ISO images, by the way. The Iso is short for “isomorphic”. The devs explain that Isomorphic JavaScript is, in their model, JavaScript that runs on client or server and that there wasn’t a build system that worked with both. Isobuild lets you do that with Isopacks that deliver the right code for client or server automatically. They’ve already got 1800 Isopacks and have their eye on mobile apps too in their planning with something going on for Cordova. Watch out for it. 1.0 is not far away.

View all posts by Codepope