I’ve been doing my usual Friday news gathering for the day job and that means here is todays NewsBits…. Here’s what’s in it:

Click here to read Compose’s NewsBits (be meeeee!) for this week

Java 8 lands: So, after what feels like an age and after its been through the thresher of reality, Java 8 has officially arrived. What’s changed? Lambda expressions, functional interfaces, default methods for interfaces, streams, a new Date API, repeatable annotations, the Nashorn JavaScript engine… there’s a good quick intro to some the language features but theres going to be plenty of settling in to do. For all the docs go to the release notes, downloads can be found on the Java SE downloads page. There’s also a NetBeans 8.0 release to go with the Java 8 release which includes JDK 8 support, including features like Lambdas and Streams, among many other enhancements.

Firefox 28 slips out: Quieter than ever, Mozilla’s Firefox 28 release has some interesting tweaks; VP9, the H.265 competitor, gets video decoding implemented; Mac OS X’s notification center becomes the destination for web notifications; WebM now gets Opus audio support; SPDY/2 is obsoleted by SPDY/3… oh and there’s 5 critical security fixes, three high, seven moderate and three low. If you’re running Firefox, you’ve probably updated already, if not you can download it for your system and language.

Wibbly wobbly timey wimey: An intruiging StackOverflow question asked why the difference between two times one second apart was over five minutes. The times were in 1927 and this was happening in a Shanghai locale – who knew there was an adjustment of 5 minutes 52 seconds to the clock there in that year? Well, one commenter did and it sheds light on how hard time can be to work with and how much information is wrapped up in those timezone files.

Node-RED updated: The most excellent graphical UI for connecting the Internet of Things (or just things in general), Node-RED has been updated to version 0.6. The announcement notes the process of separating the admin and server authentication to make deployment more robust has begun. Node-RED has nodes that accept HTTP connections and has a HTTP admin front end and previously these were all under one HTTP authentication mechanism – now the UI and nodes are more separate with the option to set a user/password for each. There’s some UI changes like a search filter for the palette of available nodes and easier flow importing by just dragging and dropping JSON onto the UI. In the node-red-nodes library, they’ve added Postgres, Amazon DynamoDB and Emoncms for more connections. There’s also fixes for the MQTT keepalive handing, an added socket timeout settings for TCP sockets and support for all 17 pins of WiringPi. More generally, there’s a range generating node now and the inject node can send empty payloads if needed. Finally, the MongoDB node now can send a user name and password – something I found I needed when writing this for MongoHQ.

Hadoop 2.3.0 released: In case you missed it, version 2.3.0 of the Apache Hadoop project got a release. The release notes list all the details. The short version is this is mostly about HDFS, the distributed file system and the changes include the ability to class the storage under HDFS so you can make tradeoffs between say spinning media, SSDs and memory, an ability to explicitly cache files or directories under HDFS (and local zero-copy reading from the cache) and the use of HDFS and YARN to simplify deploying MapReduce code. Hortonworks has a good writeup which also looks forward to Hadoop 2.4.0 with HDFS ACLs and rolling upgrades.

NetBeans 8 gets an RC: The NetBeans IDE has hit release candidate for 8.0. This is the version that will include JDK 8 support in the editor, Java SE Embedded and Java ME Embedded support, PrimeFaces code generators, AngularJS navigation and code completion, PHP 5.5 support and much more. There’s a summary in the announcement, a lot more detail in the New and Noteworthy wiki page and a pencilled in release date of mid-April.

Skrollr scrolls in: Recently spotted – Skrollr, a compact parallax scrolling and scrolling animation library for all your Webtml5.0 styled sites including the ability to “scale, skew and rotate the sh** out of any element”.

LXC goes 1.0: Linux Containers, LXC, is now at version 1.0, a major milestone which also brings together and completes a lot of things that have been working their way through the Linux kernel, like support for unprivileged containers, long term stuff like a stable API – this’ll be supported for five years, bindings for Lua and Python3 (and Go and Ruby out-of-tree support), backing storage support for directories, btrfs, zfs and more, cloning, snapshotting… and you may wonder “Hey, doesn’t Docker do many of these things” and yes it does, so it’ll be interesting to watch how things all work out. More details at the news post and check out Stephane Graber’s 10 part blog series on LXC 1.0 which is packed full of useful stuff.

Thrift double opened: Facebook brought Thrift(PDF) to the world in 2007 via Apache Thrift and many people found the network/data serialisation framework well handy. Thing is though that Facebook went and forked their own internal version of Thrift as they filled out the features and ramped up performance, something that took major rengineering over time. Now the company has announced fbthrift, available on Facebook’s Github repo, now open sourced under the same Apache 2.0 licence Apache Thrift is under.

Worth reading: WhatsApp’s Serving : From 2012, here’s a presentation on how WhatsApp does scale(PDF) with a combination of FreeBSD and Erlang – A New York Times profile of security reporter Brian Krebs who’s more like an entire security intel op in one person – Enjoy Stephen Colebourne on video presenting the Java 8’s Date and Time API at JAX 2013.

mqttwarn: Don’t want to run Node-RED but do want to route MQTT messages around? Jan-Piet Mens may have the application for you in the Python based mqttwarn, a pluggable framework which can subscribe to many MQTT topics and send them on to files, other MQTT systems, Twitter, SMTP, Redis, SQLite and Mac OS X notifications. He explains that the instigator for this was being introduced to Pushover, an iOS and Android notification app… which is now also supported by mqttwarn.

Docker image: The Phusion developers have launched baseimage-docker, a modified Ubunutu 12.04 LTS image which addresses problems they see when using Docker as more of a container for long running processes and systems – the correctness of that position is up for debate though. The mods include a corrected init, fixed apt issues, and running syslog-ng, cron and an ssh server and also includes “runit” to replace Upstart and a “setuser” command all in a 6MB of memory footprint.

SPARC in QEMU in Ship: Old, but gold, a short article on how a group of engineers replaced an old SPARCstation-5-like VME form factor system with a QEMU emulation of the hardware to keep a 3000 ton ship navigating.

Worth a read: Java 8 SE’s Date and Time quickly explained, one Java coder’s rationale and practices when using Java, Crunching NBA data with Postgresql and aggregates. 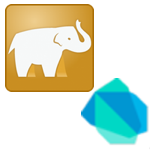 Red Hat and Google have announced version 1.0’s of their long baking new languages, Ceylon 1.0.0 and Dart SDK 1.0. With three years of work on Ceylon and at least two years behind Dart, are they worth looking at?

Red Hat’s Ceylon comes from Gavin King’s team at the company who’ve been working for around three years on a language which initially targeted the Java virtual machine but now also can generate JavaScript. Created as a Java (the language) replacement, it features the a fairly familiar curly brace syntax, adds in declarative syntax for tree structures, removes primitive types as part of a new powerful static type system and mixes in mixin inheritance.

But thats just scratching the surface – the documentation’s introduction gives a better feel for the extensive re-envisioning of a large systems language. There’s also a tour to get some hands on experience and an Eclipse-based IDE for Ceylon already. The language and tools are all Apache 2.0 Licensed and source is up on GitHub. The JVM is a hotbed for new languages and Ceylon adds to the mix with what feels like a pragmatic approach.

Meanwhile, Google’s Dart 1.0 doesn’t go near the JVM; it’s designed for browsers and specifically as an alternative to JavaScript. Although Dart can translate to JavaScript that is predominantly so Dart code can be run in current browsers. Google’s long game is to see a Dart virtual machine in every browser and get higher performance browser code. The language on first look feels like a more formal JavaScript, but with a push on readability, structure and expressiveness. On second look, it feels more like Java, with annotations, an import system,  Its libraries bring along support for streams, lazy iterables, futures, a cleaner DOM API and more. There’s plenty to look at and this presentation from Google I/O covers more of the language.

CoffeeScript, TypeScript and other browser-centric languages work more in harmony with JavaScript and don’t set out to replace it entirely, but thats what Dart has set out to do and that may be its biggest problem – the big performance benefits of Dart come with most browsers having the Dart virtual machine, but with only Google onboard, that isn’t going to happen. The JavaScript tool chain has some neat tricks though like tree-shaking (reducing library dependency) and minifying.

Will it gain traction? There’s a whole web of JavaScript that’s a standing bet against it and personally I find it somewhat hard to get excited by the language itself; Brendan Eich’s ten day hack that is JavaScript is still impressive, if rich in dark corners and sharp edges, but it does have cross-vendor support and standards backing it up. But if the development of JavaScript as a language and a standard stumbles again as it has in the past, Dart may have a window. The tipping point to look for is when another major browser maker adopts it. Dart is also open source (BSD licence) and source code is available on its Google Code project.

What Ceylon and Dart do have in common is their version 1.0’s are richly tooled and documented. That should, in itself, be a model for anyone wanting to bring a new language to the world. Anyone wanting to look at either language is not going to have difficulty getting started.